In world without death…
she is dead.

Titus is no hero. Not even close. He’s not your typical eighteen-year-old, either. This is his fourth life…even if he can’t remember the ones that came before it.

Welcome to the Corporate States of America. For the poor, it’s a struggle to survive. The rich? They clone themselves, living their lives of excess on repeat.

But rich or poor, everyone knows about the mission to colonize Mars. Titus more than most. After all, his mother was on it.

The council said it failed. The reality is so much worse.

Now Titus is determined to find out what really happened. But even if he avoids getting killed, maimed, or unwillingly roboticized, the truth could cost him more than just this life.

It could cost him every life to come… What Amazon Reviewers are Saying

“This was such an enjoyable, engrossing, and sleep-depriving book, deftly written and impeccably edited.”

“I loved the hacker girl so much. She was so badass and such an awesome character! And damn, this whole book was just one thing after another.”

“With conspiracies, charming characters, a complex story, and Titus’ determination to discover the truth, it was so well written it was really impossible to stop reading until the last page was finished.“

“Mind-blowing! A mix between a dark, dystopian future and cyberpunk with a wonderful cast of characters who are complex, layered, and not always who and what they appeared.”

“Titus’ wry humor was easy to connect to. The characters were well-developed, believable, and interesting.”

“A very well-written story of a possible dystopian future world with great world-building. The characters are well-developed, realistic, and very interesting. Action packed with plenty of twists and turns.“

“The author does a great job of creating an immersive world and characters that you feel invested in. I’m reading it now for the second time. An absolute must for fans of the genre!”

“Full of adventure and mystery. A dystopian world that has a ring of truth to the world we are building today. “

“A fast-paced and gripping tale about an America ruled by eight megacorporations. I enjoyed it immensely. For sheer entertainment value, you can’t do much better.“

My father simply spreads his wealth and privilege around to get his way and keep everyone happy. Screwing the rules with his money and making a profit in the process.

The closer we get to the center of the upmarket district, the more images and vids crowd the streets and storefronts. A disgusting amount of sights and sounds fill my senses. Try this. Buy this. You want this. You need this.

And they call this progress. 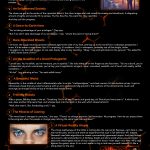 “But if we don’t take advantage of our privileges,” I ask, “what’s the point in having them?”

I lie there, the rough ceramic pavement pressed against the side of my face, peering up at the world from a sideways perspective. I know. It’d be easier to stay down. But if I’m anything, it’s stubborn. And, in retrospect, probably not all that bright, either.

I struggle to my feet and stagger to one side, barely able to stay standing. “Okay,” I say and spit blood on the ground. “You asked for it. Who wants some of this?”

6. All the Qualities of a Good Protagonist

“Let me see. You’re selfish, you’re immature, you’re spoiled.” She ticks them off on her fingers as she lists them. “You’re a drunk, you’re a chauvinistic pig and a womanizer, you’re lazy, you’re egotistical, arrogant, mean, conceited, wasteful, out of touch with reality, selfish, narcissistic–”

Meanwhile, in the middle of what I affectionately refer to as the “multipocalypse,” enriched uranium hit rock-bottom prices. It got so ridiculously cheap that any extremist group with an ax to grind could dig around in the cushions of the old extremist couch and scrounge up enough bitchip to buy a miniaturized atomic bomb.

After a pause, Bentley bops in the air. “Smashing. You’re all set. Cheerio and good day, sir! Should you live to see it.” It whirls on its axis, does another little aerial hop, and whizzes back into the hatch in the wall, which closes behind it.

3. The Miracle of Cloning

“The world hasn’t changed in centuries,” she says. “There’s no change anymore. No innovation. No progress. How do you expect there to be progress when the people in charge keep reliving the same lives over and over?”

The virtual realityscape of the Orbis is nothing like the real world. Because–let’s face it–the real world sucks, and no one wants to experience that suck in full-definition VR. Instead, Nanosoft used data algorithms to create a procedurally generated utopia. And they’ve had centuries to edit and perfect it. A limitless, bright and shiny world where you can forget about the meaningless nature of your existence for hours–even days–at a time. Why rage against the system when it’s so much easier to log in and lose yourself instead? It’s like a tranquilizer for the soul.

I scoop up the katana and try to twirl it through the air like I saw Liviana doing earlier. But I fumble it and almost disembowel myself. It clatters to the floor. I stare at it stupidly.

Liviana lies on her back, gaping at me in disbelief. “You are so going to die.”

What Are You Waiting For?

In the immortal words of Titus Remington, “Some of the best stories start with a bad decision.” But all it takes to start this story is one good decision.

Find out why readers can’t stop talking about Democracy Inc. Get your copy today. 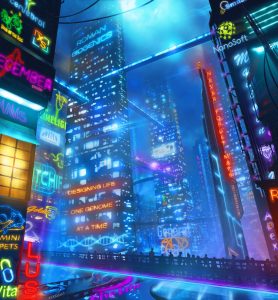